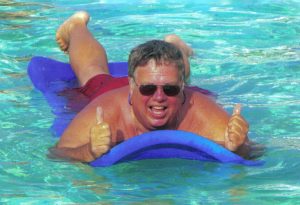 Bunk Mann first fell in love with Ocean City as a young boy, joining his parents on vacation in the resort town each year, while also making weekly trips to the beach from his hometown of nearby Salisbury. Memories of the beach, the boardwalk, and the carefree summer life started early for Bunk who remembers that time fondly; “it was a great time to be a kid and it was a great time to be in Ocean City.”

From childhood through college, Bunk continued to be a “beach boy,” enjoying the typical summer jobs in Ocean City including running a beach stand and working at the Embers Restaurant. From hanging out on 9th Street and the boardwalk to enjoying the infamous beach parties on 94th Street to attending Lifeguard Balls and sneaking into the Paddock and the Beach Club, he lived and breathed Ocean City life. After graduating from the University of Maryland at College Park, he was forced to put on a suit and tie and live the 9-5 life in Washington D.C. A few years later, Bunk was called back to the Shore, moving back to his hometown to found Mann & Gray Insurance Associates. Today he lives in Ocean Pines with his wife, Shari, and is lovingly known amongst friends as the “world’s oldest beach boy.”

The idea for the Vanishing Ocean City book first came to life in 2004 when Bunk and his mother went to take photos of some of the old hotels being torn down. His mother turned to him and said, “it’s so sad, the Ocean City that I remember is just vanishing,” and from there an idea, and a future book, was born. Bunk had always carried a keen interest in photography so it wasn’t long before he started snapping photos of the “vanishing Ocean City,” for what he thought would be a collection of ‘then and now’ photos. At the prompting and encouragement of friend George Hurley, he decided to start doing interviews in order to collect memories and stories to coincide with his photos. 171 interviews, over 1000 photos and 900 postcards later, a book was born.

“I realized that the story was really about the people in this town,” reflected Bunk, adding that the book is a true story of the history of Ocean City, with memories and photos of everything from the hurricane of 1933 and the March storm of 1962 to the pound fishing and railroad eras in Ocean City. The 7.5 year project has brought him more than a great book about his beloved beach town; he has also made lasting friendships along the way while spending hours upon hours hearing others’ fond memories of Ocean City. Mayors, local businessmen, visitors and locals make up the list – “I’ve met some really great people – people that I like and greatly respect – from writing this book.”

Bunk serves on the Board of Directors of the Ocean City Life-Saving Station Museum. He is an active member in the community and hopes to share his love for Ocean City with each reader while passing along the unique and personal history of the resort town. As you turn each page, enjoy reflecting on the Vanishing Ocean City…